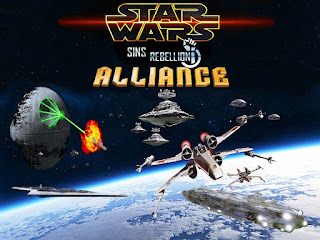 The Alliance version for the game Sins of a Solar Empire Rebellion is a robust work with a lot of additions made different from other Star Wars mod in that game.

Instead from follow the classic factions from Star Wars, it adds the Galactic Empire, Rebel Alliance, Black Sun, Hutts, Warlords and FreeSide.

The first four have not too secrets to the player, but the Warlords and FreeSide can sound very strange.

Warlords is a faction based in the Imperial Remants with many super weapons and other powerful things.

FreeSide is the join from all the other factions at Star Wars. Instead from to create different factions that you must load one by one replacing others, I have made single faction joining all these factions. I find it much more fun than other way.

This is my eighth version of this mod which it adds most of the space units from my Star Wars Empire at War Forces of Corruption Alliance for the Empire, Rebel Alliance and Black Sun.

I have made this version from the mod for the game Sins of a Solar Empire Rebellion 1.96 + All DLC 1.96.

I do not go to tell you how many or what units you will find, if you want know about them, you can check the Encyclopedia section from my site http://firefoxccmods.com and search the space units for the Empire, Rebel Alliance and Black Sun. The other option is play the mod.

-Added as the First Order ship constructor the Empirical.

-Added as the Resistance constructor the Profundity Com.

-Added Star Wars map made by Sersanara modified for the mod, by the moment only with original planets.

-Capital ships and ships slots values changed. Thanks to one idea from LeonDeGrelle, I reduced it. Now win is easier, specially playing agains AI with a higher difficult level and it avoids these huge enemy fleets agains you.

-The pirates, I have added more type of ships for the pirate raids and I have reduced the amount of them. At least now, you have a chance against them.

-Added the Container Transport as the Starbase builder from the Rebel Alliance, Black Sun, Free Side and Hutts factions.

-Added the Imperial Star Base for the Warlords faction.

-The 1.6 adds the files compiled and by this reason, the performance is better, specially with the loads.

-Fixed stability problems from the 1.4.

-Improved the engine lights with a similar idea to the particle engines made by ERock72 for the Goafan77 Star Wars: Interregnum mod. Just the glow particle. I have not made customized engines for each unit, there are more of 200.

-Several new textures made by Nawrocki for my FOC mod converted for the SOASE mod models.

-Several text improved around the mod.

-Improved serveral textures from the mod.

-New voices for most of the units.

-Some small fix around the mod.

-Fixed World Devastator weapons and added additional weapons to it.

-There are more improved textures from Nawrocki but I have not listed everything.

-Adapted the mod code for the 1.82 version from Sins of a Solar Empire Rebellion.

-Many new textures for several units. Some units have small changes and others very big changes. All them are from Nawrocki. The unique exception can be the lights, because at SOASE, they run different from the lights at my Star Wars Empire at War Forces of Corruption Alliance mod, I have not made too many changes in the original lights from the units made for the mod.

-I know, they are few changes but they are enough by the moment, I promise more at a non too far future.

-Just uncompress the rar file into your ..\My Games\Ironclad Games\Sins of a Solar Empire Rebellion\Mods-Rebellion v1.82\ folder. Next launch the game and select the mod from your mods list.

You can read a complete list of credits here.

Help us to maintain the site online. With your donations we can make it!